Spanking. The one word probably elicits a lot of emotions for many. Whether you are an advocate or against the idea, it was something I didn’t think much about. I was spanked as a child and I had seen spanking within my family. And though I have been one to do as much peaceful parenting as I could, I stood on the fence trying to decide if we should spank our kids. We’re in the older toddler days of pushing limits, whining, and willful disobedience at times. And the day came when my husband and I were done. We had had enough. So we tried the idea of spanking and continued to entertain the idea as something we “might do” for about a month. And in the end? We gave up on physically punishing our children. 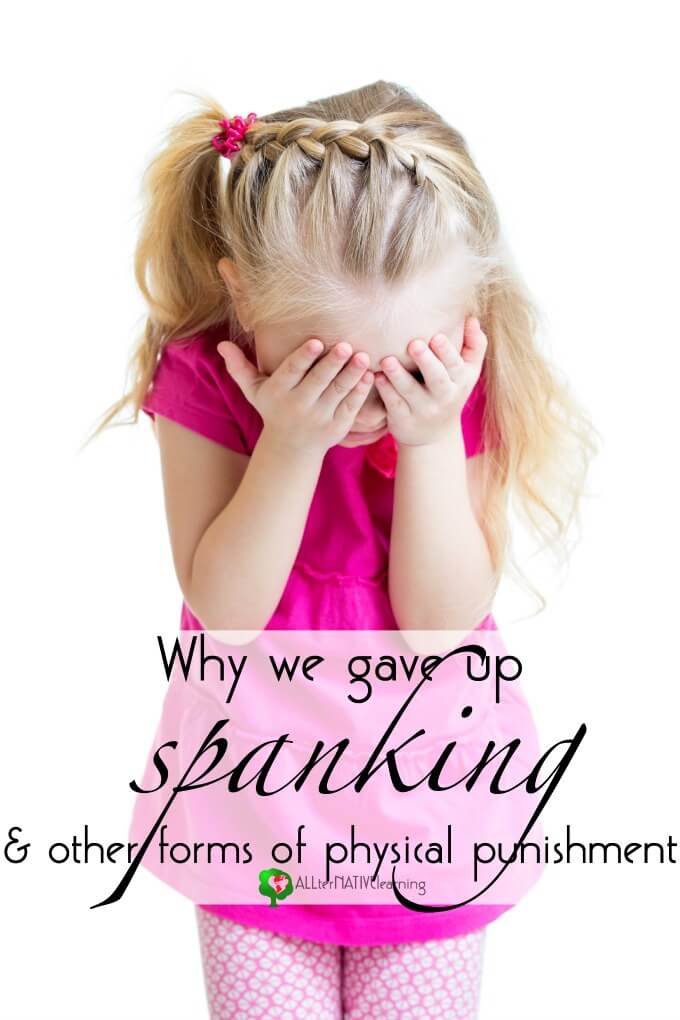 Let’s start off by saying that my daughter has probably been spanked around or less than 5 times in her life. And when I say spank, I mean she got a pat on the bottom with the same force as we would do if she was play and giggling. Just different feelings and words were attached in the situation. Again, we have always resorted to using our words, explaining consequences, and tried to not even use punishment when possible to help guide her and raise her in acceptable and appropriate behavior. However, at the crossroads of frustrated parent and defiant toddler, we tried it. Something had to give and nothing was working.

Did it work? Yes.

It scared her. She stopped. She began to even fear the words that would come out of her father’s mouth when he said “Do I need to spank you?”. Wide eyes, tears, and fear were the emotions every time.

So wait. We were giving up rational conversation and constructive discipline for fear-based parenting and a child that was afraid of us if she did something even remotely wrong? That didn’t seem right. Even if it what we were doing wasn’t working in the moment or in those days, it had worked. And even if it would never work again, this new option didn’t seem to foster the relationship with our child that we wanted. Even from the very first time it happened, my gut said it wasn’t right. And really, when we are at our wits end, emotions are higher than they should be for any physical contact with children.

And then last night happened.

Even after at least a week had gone by since I had really decided that spanking was “not my thing”, my daughter was standing in the bathroom with me. After using the bathroom, she turned around to flush the toilet. Much to her dismay I had already done it. In a moment of frustration, she lashed out, screamed, and hit me across the leg as hard as she could.

I was livid. I was horrified. And I was so taken aback. Hitting is not ok. Lashing out and slapping is not a healthy way to demonstrate how we feel. And I I stood there trying to tell this to my daughter, I realized what had happened. We had been telling her when behavior was unacceptable and at times, she even got an accompanying gentle spank. And in this moment she deemed my behavior unacceptable, so she screamed at me “No! You’re not supposed to flush the toilet. I am!” And she hit me.

As parents, we discussed the situation. And as we stood there holding her, talking to her, and explaining her own emotions to her two year old self, my husband quietly said ” I don’t think spanking is something we should be doing or threatening anymore.”

And while frustrations as parents are not going to subside any time soon, spanking got us nowhere. She didn’t listen to us or behave any better, she only modeled exactly what we were doing. So we quickly returned to our normal of modeling appropriate behavior, talking through consequences, and leaving fear based parenting behind us.

Similar stories you may enjoy