Many of you have been asking how Whole30 is going for us. And while I wasn’t planning on doing weekly updates, apparently that’s what you guys are craving. And our first weeks have been  very insightful. While I prepped for the “How will I feel on day 4 of whole30?” questions, there was a lot that I learned that goes above and beyond that that many don’t talk about as much… Stuff like logistics of cooking, working around social pressures, and even poop. Yes poop. 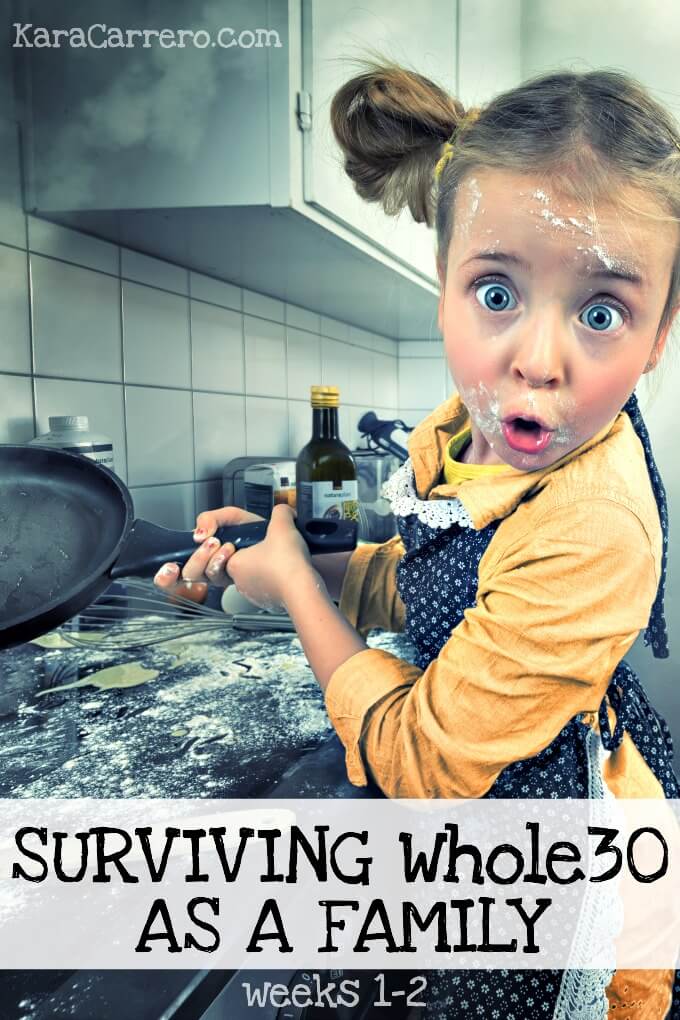 Affiliate links included for your convenience and to supplement our grocery budget.

On day 1 my husband came home from a work party with a plate of cake.

He not only forgot for himself, but he brought this delicious looking sugary treat into our home the day I couldn’t even take a tiny taste. And what was I supposed to do with that stupid cake? I didn’t want to waste it, but hell was going to break loose before I was going to have to admit I caved my first day in.

And I stood firm.

But ultimately, I gave the cake to my oldest daughter after she ate her entire dinner. While I didn’t want to, I knew she didn’t eat much sugar even when we’re not trying to get through Whole30 and she ate an entire half of a head of roasted cauliflower by herself. So I could concede that one.

Day 4 of Whole30 and I was starting to wonder why we drug our young kids into this process with us because even though we could find ways to stay compliant while eating out, it was hard to explain to my 3-year-old that we weren’t getting the things we love ordering at Chipotle. So I conceded again.

That’s when I realized that as family going through it, it’s much harder for them to stay compliant if you have to eat out much. Obviously at home, you just don’t bring it into the house.

And that was something I could live with.

While I have always been a believer in my crock pot, this bad boy gets it done. Fast.

One day I forgot to pull some meat out of the freezer and  I was able to pop it (still frozen) in the instant pot and get a scrumptious meal done in just 45 minutes.

It hands down is the best purchase I have ever made for our kitchen and is part of how I can now get meals done more easily as a WAHM. I purchased it in preparation for our family doing Whole30 because I had seen reviews and was in disbelief… but if I was ever going to need it or try it, that would be the time.

I have used it at least every other day of our Whole30 journey. For veggies, for meat, and even to make chicken stock with its slow cook function after I used it to roast a whole chicken in 25 minutes.

Pomegranate juice in general is something we enjoy around here. But adding the lime took it to the next level. Unfortunately $8-10/bottle means we usually only get one, maybe two a week. But we actually try to budget for it we like it so much.

Especially because they are a great grab and go solution, we have gone through so many. I love getting the cashew and apple pie varieties in a mixed box at Costco, plus is saves me money.

The go-to eating out solution. When we’ve needed work lunches or needed to meet friends, most are completely cool with meeting us there as we explain compliance.

What we learned in the first week of Whole30

Costco and Wegman’s are our favorite places to shop for compliant food.

Both have great selection and great prices. The guacamole at Costco is super, duper tasty and they have pretty much everything I could want. We also devoured a can of their Macadamia nuts. Wegman’s is just a family favorite store anyway, but the thing we loved most was their store brand sausage with red peppers. SO GOOD and very versatile.

I am not quite sure if it’s the eating more fiber or the fact that your body is ultimately on detox by eliminating foods.

But yes, I think we all experienced it to some extent. It’s gone down and leveled out, but I was definitely taking Psyllium in my water that first week to balance it all out quicker.

We felt better on vitamins.

When I felt sluggish I took a Garden of Life B complex vitamin. That, drinking water, and staying active helped. Because even though we weaned ourselves from sugar to do this, the first week was still a dousy.

My husband begrudgingly reported that he was dreaming again, not waking with back pain, and felt like he had exceptional mental clarity. Sounds like he’s sleeping better, huh? Though he didn’t want to admit it, I’m glad he did.

Our kids snacked. At home and out and about.

They are growing and I want to feed them when they’re hungry. So I didn’t withhold. So while we’re doing it as a family, I have been much more lenient with my kids.

Parties, social constructs, and work events sometimes make it much harder to stay compliant. I had a job to do in a nearby mall. I had to eat there as it was part of the deal. With nothing compliant, we wound up eating sushi because it was the cleanest food I could find.

My husband also has had 2 or 3 instances where not eating the food being served would have truly been tacky, so he ate the food. And that’s fine.

We allowed one small rule to be broken once a week (if each person chose to).

While each of us could choose to keep the path of the straight and narrow, I have always believed in an 80/20 rule for daily living. On Whole30, I think a 99/1 rule is pretty good too. So if you want a little of the GMO-free corn on top of your Chipotle this week? Ok, do it. Pick a small concession. I think it actually will make you more successful in the long run, even when you’re done with Whole30.

Get more Whole30 resources for your family here.