With fall here and all the great gourds and pumpkins arriving at the farmers market, in stores, and popping up around town, my toddler is so amused by them. We made a quick trip to the local grocery store this past week and as we walked in the door she saw all the big pumpkins and asked “what’s that?”.

I told her they were big orange pumpkins. She repeated me and we went on.

Walking through produce all the sudden she exclaimed “Momma! BABY pumpkins!”

… and 3 for $1 meant we were coming home with a dozen. So the question became what to do with all these baby pumpkins to engage her pumpkin curiosity and to promote her learning through tiny pumpkins. 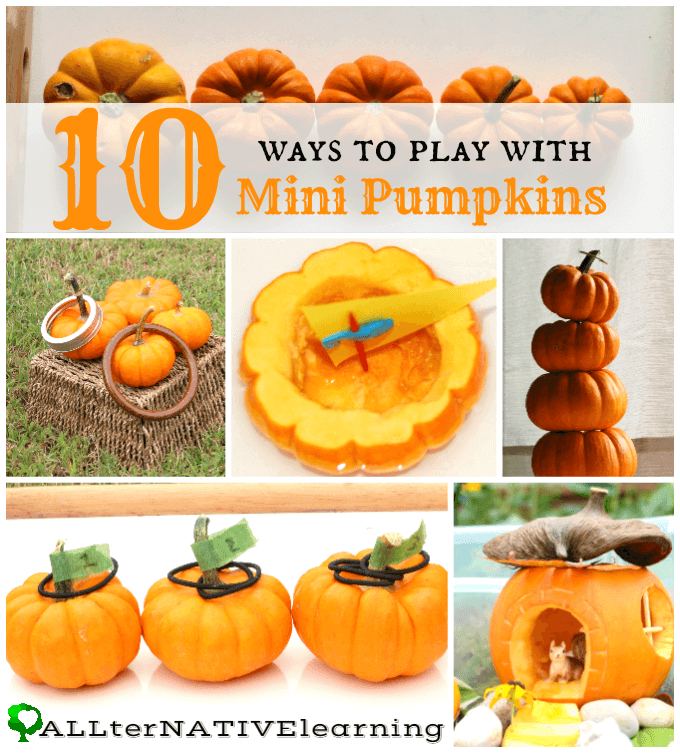 How to Use Miniature Pumpkins for Play

1. Sort them by Size & Thickness – This is a Montessori-inspired idea in that it’s similar using the brown stairs, or even the cylinder activities. You can have your child sort the mini pumpkins based on their size and also based on their thickness. For my almost 2 year old, doing it by circumference was easiest.

2. Sort them by Gradient Color – Another Montessori inspired activity, you can easily sort them from darkest to lights and vice versa. If you would like, you could even find a paint chip that has similar colors at the local hardware store. Adding the paint chip would be a little easier for younger kids because it’s more of a matching game than purely abstract color.

3. Stack the Pumpkins – Again, like the Montessori Pink tower, there is a right way and a wrong way to stack. There is a lot of critical thinking that goes into pumpkin stacking. For instance, can a pumpkin with a stem be included in the mini-pumpkin tower? Will a tower with smaller pumpkins on bottom still stand or does it have to have the widest pumpkin as the base? If the biggest mini pumpkin is not very wide, does it still make a good base? So on and so forth. This made a great activity for my daughter and she really enjoyed the process of stacking and exploring. 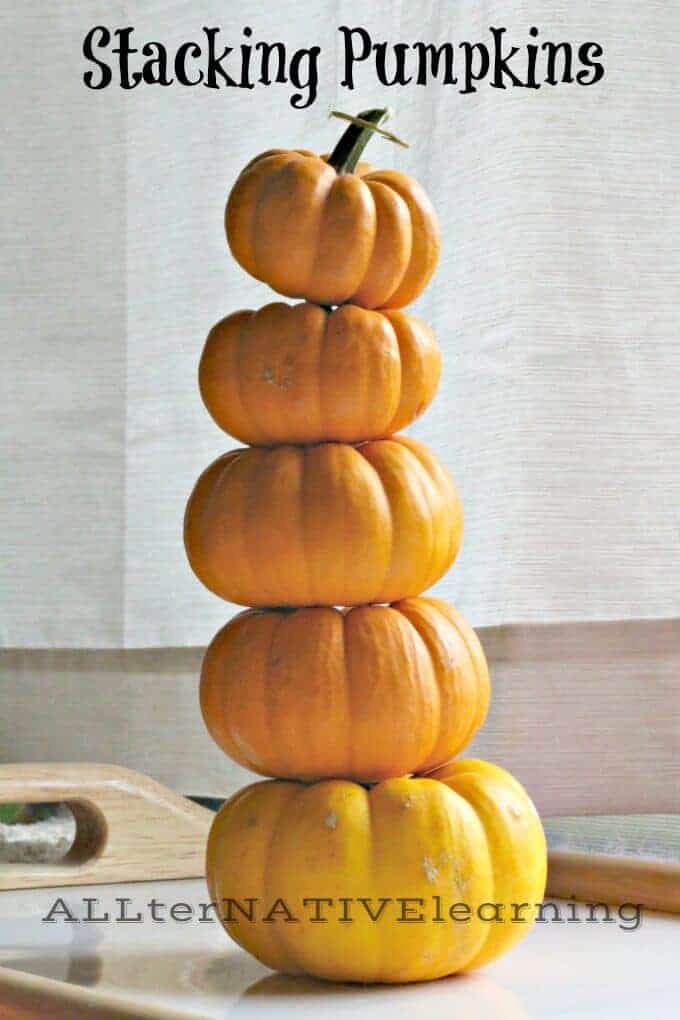 4. Thread their Stems – Work on find motor skills by finding something to thread onto the mini pumpkins that have stems. For us, we used tiny hair bands because it was something we had on hand and was easy to thread. 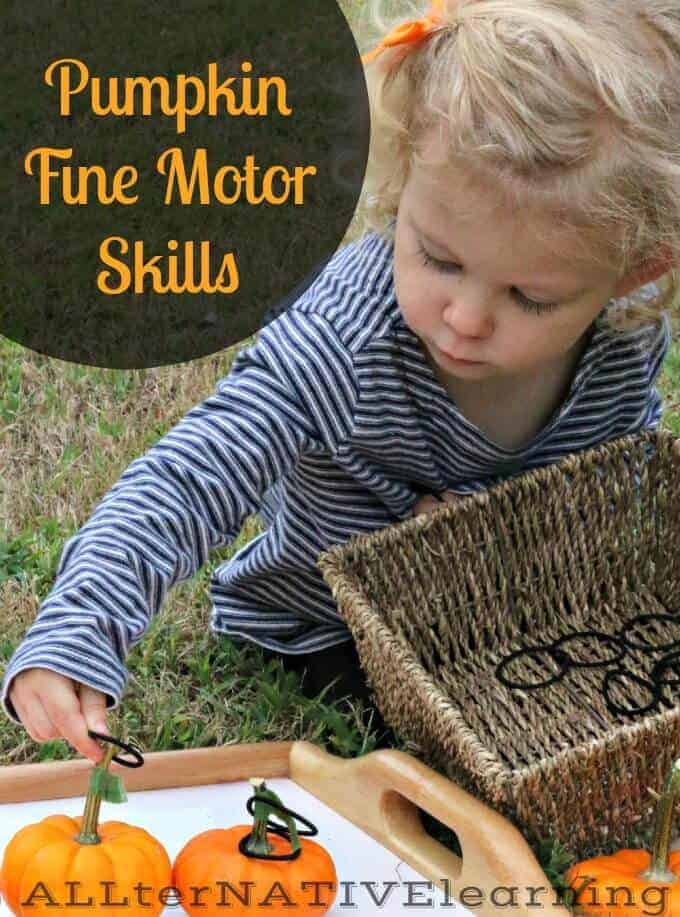 5. Toss the Mini Pumpkins – Work on Gross motor skills by having your child throw the pumpkins (over or under hand) into a basket, bucket, or just between each other. 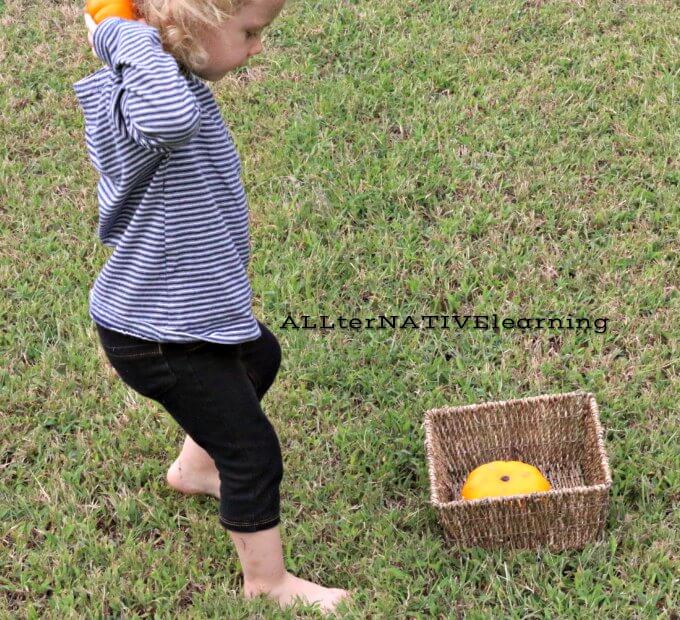 6. Have a Ring Toss – Work on gross motor skills and hand-eye coordination by finding some rings to toss over the pumpkins. You can do this with large embroidery circles and you can make the game a little harder by finding small rings like canning jar rings. We also did this last year with big pumpkins at my daughter’s first birthday fall carnival. 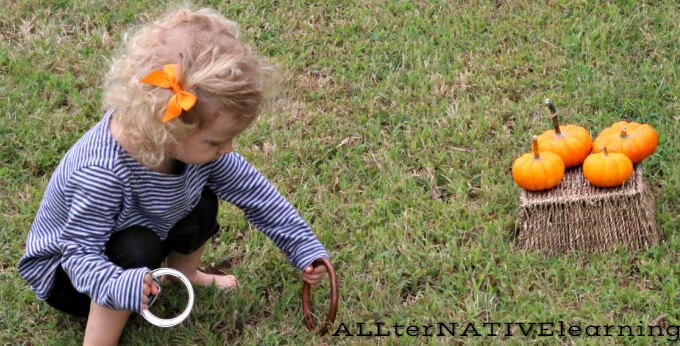 7. Create a Matching Game – For us, we are working on her numbers so we did a number matching game. However, this can be done with any sort of concept you are working on with your child. (Capital and lower case letters, Sounds to letters, etc.). While we were just going to match each pumpkin that had a Arabic number on it to the tray that had dots on it, my daughter preferred to combine the threading game with the numbers; therefore, she put the number of bands on each pumpkin that the number indicated.

8. Make a Mini Pumpkin Boat – This is a simple sink or float activity, but you get the opportunity to turn a miniature pumpkin into a boat! The Preschool Toolbox had this great idea and even suggests putting the pumpkin boat in a bag when you’re done to observe it over time.

9. Create a Pumpkin Sensory Bin – Adventure in a Box probably has the cutest and most creative sensory bin I have seen. They carved the mini pumpkin to be a tiny little house for the sensory bin. This is a cute and fun idea for the fall season! 10. Use Mini Pumpkins to Paint & Make Prints – What Do We Do All Day cut their pumpkins in half to make stamps out of their miniature pumpkins. Of course, you can also always paint the outsides too!

How do you utilize mini pumpkins? 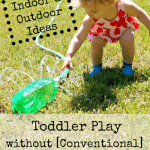 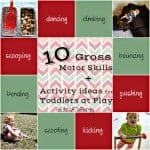 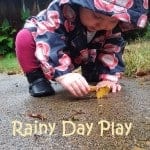