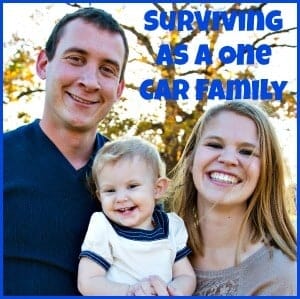 We are a one car family. The phrase “one car family” is one that many people shudder just to thinking about the possibility. I know I did at one point think that it was completely crazy that anyone was a one car family; however, after a sudden car accident  when I was 9 months pregnant, we were forced into this crazy scenario. Now we have been sharing a car for a year and a half and it has truly been eye opening. It is not impossible and it has definitely changed my marriage and my daily schedule.

So how has being a one car family helped us as a couple and as a family? How have we survived this seemingly cruel experiment? Well it really has been like marriage counseling. We have been forced to talk to each other, plan out our days, weeks, and years more efficiently, and work through issues together.

Like I said, we got into a car accident and hit a cow going 70mph. So yes, this seems like it was a huge deal. But the bigger issue was that after weeks of tell my doctor that I thought my baby was breech, this happened and he finally had to do an ultrasound, only to find that she was. So instead of dealing with finding a new car, that time was spent in a frantic whirlwind figuring out who was going to deliver my baby and how. It was spent going to doctors appointments both with and without my husband. So that was the start of our forced marriage counseling, but the car itself has been the continuation of it all. While the accident was not wanted (of course), it has been a great blessing in many ways over the past 18 months.

We are forced to communicate

No, not just chit-chat small talk, but real “what are the most important things going on in your life right now?” kind of questions. We have to communicate with each other so that the car does not become an argument. If I have something that absolutely requires that I have the car, I have to tell him how important it is that I have to drop him off that morning.

So many you are like us and communication is not a fine-tuned skill you have as a couple. I totally get that. One of the best things we did to help ameliorate this situation was make a family calendar. Not one that sat and collected dust, but a virtual one that we both had access to and updated real-time. We did this by setting up a family email account through Google. While we both already had accounts, this one was specifically for both of us. We added a calendar to our phones and synced it to the family email account. Now any time we have a commitment or engagement, we add it to the calendar.

If it’s not on the calendar, it doesn’t happen. End of story.

Beyond just having the calendar, we plan things out a bit more rather than flying by the seat our our pants. One of the other reasons for this is because my husband works at a place that requires an ID to even get on the parking lot. I used to have one, but it expired and it’s a process to get. Now the planning has been taken to another level because we have to allow enough time for him to walk to the car.

We also have only one car seat. When the accident happened before I gave birth, there was no reason to buy a second one. This means if someone can come by and pick me up, I still need a way to transport my child. I have to either ask for the car seat to be uninstalled or get it myself.

If for some reason I have an event or appointment that requires me to be there at a certain not-so-convenient time, he has to be able to find a ride to or from work. While we have had last minute scramble-for-a-ride on a Friday afternoon kind of disaster, they are few and far between (and usually something major came up). 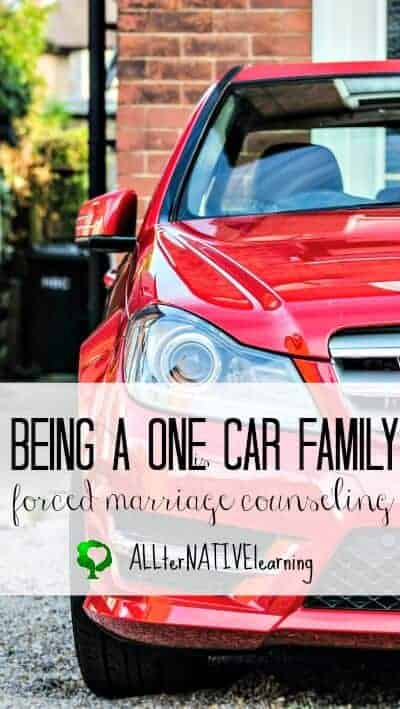 Sometimes we both demand the car. It doesn’t mean that one of us has to give up our plans, it just means we have to decide who needs the car more and who can make do with finding a ride.

It also takes teamwork in terms of getting ready. If we both had our own vehicles, we wouldn’t have to worry about getting up at the same time or even making sure that my husband has a packed lunch especially on the days when he doesn’t have the car to go get anything. We have to work together to wake up, take care of morning chores, and  get our toddler into the car.

The biggest part of teamwork is that we both agree on  the details. Me being stuck at home with a toddler all day every day is not fun. It’s actually a bit maddening. So to be able to communicate to my husband that I need some alone time, especially on days that I didn’t have the car is SO important. It took some time to get here, but agreeing that I don’t get a lot of interaction outside the home means I do get 90 minutes each week day to do my own thing. Whether I leave the house or stay home, I am spending some time doing something other than the mundane. This also means dinner is at the same time every night, which never happened before!

Other Benefits of being a One Car Family

It’s better for our pocket book and we help the environment because we are saving gas. Even with taking my husband to work and picking him up on top of my errands, it’s less than when we both had the freedom to go anywhere and do anything. We make more conscious decisions regarding our miles driven. In fact, it’s more sustainable for us to share one SUV than it is to have a car that got 40 mpg and an SUV that was used occasionally.

It’s nothing new. Whether we are on vacation or we choose to get a second car, it’s not a new hurdle to conquer.

We spend more time investing in one another. While we talked before, we actually talk more now because we spend 30 minutes with each other each day we  share the car where we can’t do anything else but sit and listen to each other. It’s a truly captive audience. 😉

While there are times when it’s not convenient, it has definitely been a marriage strengthener and a family building lesson to only have one car. We do more together as a family rather than time spent on our own. From running errands together to just spending time as a family, we do more together and communicate more which in my book is a win even over convenience.

Read more of my posts on parenting, marriage, and family.